Kimondo is a traveller, forever following the herds as they migrate across the plains of the Serengeti. Kimondo is a mobile camp which moves with the migration, splitting the year between the north and south of the Serengeti, just like the millions of wildebeest which move with it. But this is certainly not camping as you know it.

Kimondo is a mobile camp which moves with the migration, splitting the year between the north and south of the Serengeti, just like the millions of wildebeest which move with it. But this is certainly not camping as you know it. From July to October home for Kimondo is near the sinuous Mara River on the famous Lamai Wedge, where massive herds brave the jaws of hungry Nile crocodiles. As winter eases and summer warms the land, the herds move south to calve in the lush grasslands of the southern Serengeti. As the herds move, so does Kimondo, to ensure you’re never far from the heart of the migration.

Kimondo in the North (July - October)A golden triangle of grassland between the Mara River and Kenyan border, the Lamai Wedge is regularly hailed as one of the highlights of the entire Serengeti ecosystem. A gathering point for the herds that have made it safely across the Mara River, during winter it’s a region rich in wildebeest and antelope. And, of course, the predators that pursue them. It’s here that Kimondo puts down roots from July to October, offering unparalleled Big Five sightings just minutes from camp. The Mara River, famed for dramatic scenes as the herds attempt the treacherous crossing, is just a short drive away allowing you to experience both the drama of the migration and the stillness of the Serengeti.Kimondo in the South (December - March)As the days warm up, the herds lift their noses and head south, with Kimondo not far behind. In November the camp is closed as the tents are folded and the site returned to its previous, pristine condition. Come December, Kimondo is pitched anew in the shade of a stately Acacia Tortillis, deep in the southern Serengeti. It’s here on these grassy plains that the millions of wildebeest who have wandered hundreds of kilometres have a chance to calve, graze and rest… forever keeping a watchful eye out for hungry lion and cheetah, of course. Set in a natural amphitheatre with outstanding views of a permanent water hole, Kimondo’s summer home is an idyllic one. Superb game viewing can be had on the daily game excursions, or simply enjoyed from the private terrace of your safari suite. The migration, it would seem, has come to you.

There’s a good reason for choosing a mobile camp over a permanent lodge: the migration is a transitory beast, forever on the move. And as the herds of wildebeest travel on their never-ending circuit of the Serengeti, so Kimondo gives guests a front row seat to the action.

Kimondo Camp offers an ideal base for viewing the migration with easy access to river crossing points. Game drive viewing of over a million wildebeests plus thousands of zebra, gazelles, elephants, giraffe and eland. The birdlife in the Lamai region of the Serengeti is prolific and provides bird watchers with silver platter sightings. The region around the Serengeti is home to the Maasai people and at Kimondo a local Maasai may accompany you on nature walks in the Loliondo Reserve 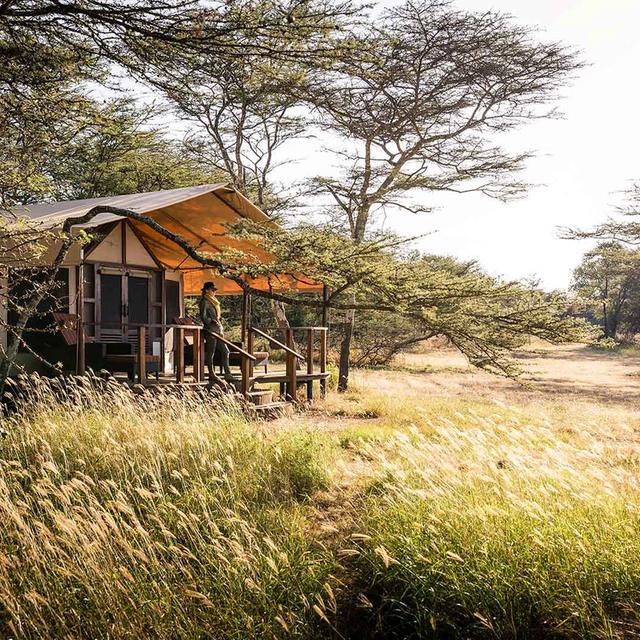 Serena Safari Lodge is a large lodge centrally located, adjacent to the famous Western Corridor and Grumeti River. It has been designed to blend completely into the living landscape. It is well located for the migration between December and May.

Hidden among the rocky outcrops Serengeti Migration Camp is located in the northern Serengeti, at the starting point of the Migration. The best time to visit the camp is between July and November, in order to witness the Migration. 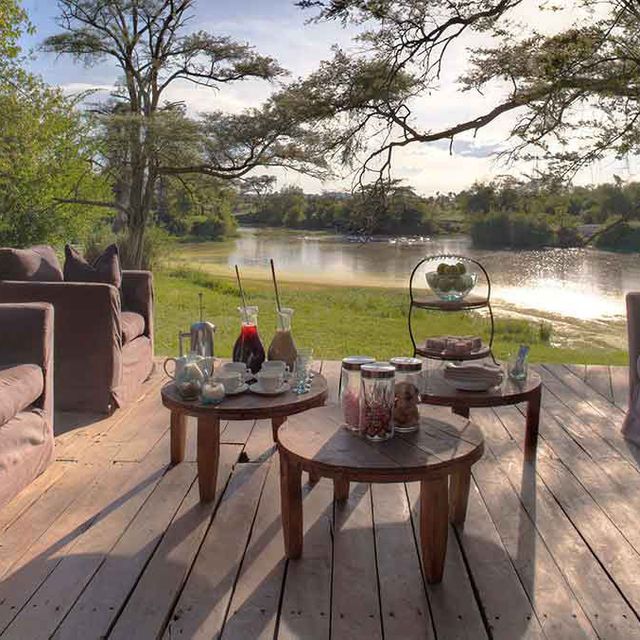 This 8 night Nomad Northern Tanzania Big 5 Safari explores the best game viewing areas and ends at a Serengeti migration camp, ensuring you can see the wildebeest migration at any time of the year.

Enjoy a 9 night luxury safari to Tanzania following the annual migration route. Watch the wildlife cross over the Mara river from your exclusive safari tent and enjoy a stay in the River tree lodge with Mount Kilimanjaro as the backdrop.