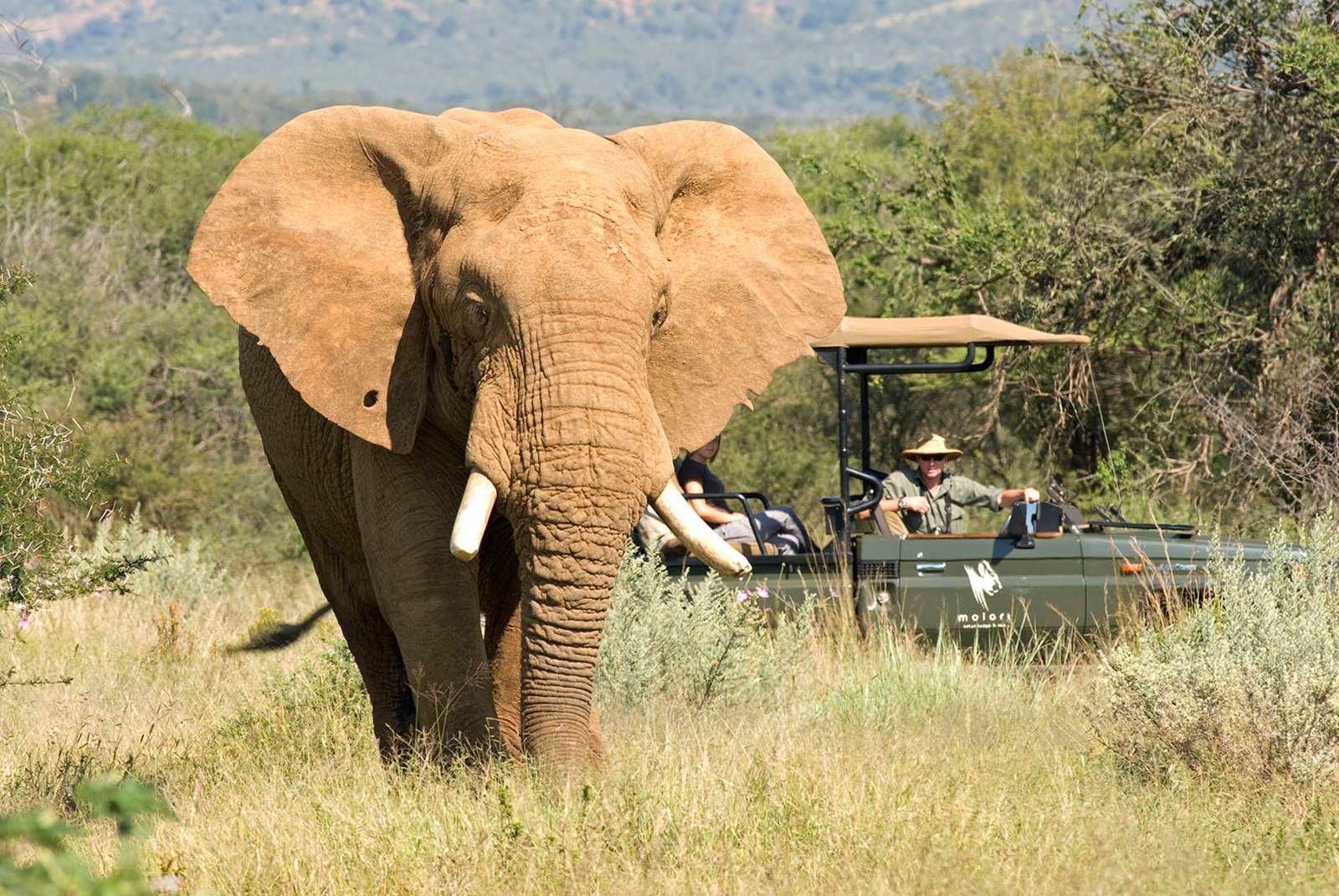 The Madikwe Game Reserve covers 750 sq km leading up to the Botswana border in the north of South Africa. This Big 5 reserve lies in the Madikwe River basin and incorporates private farms. Aimed at conservation of the land, the people and the wildlife, all profits support the community.

Madikwe was created in 1991 when poorly used farmland was transformed into a game reserve with the aim of benefitting the local community. This 750 sp km reserve lies in the north of South Africa, on the border with Botswana border in a malaria-free area. The reserve itself is surrounded by adjoining private game farms that are not separated by fences, but have private traversing rights.

In the largest movement of animals since Noah filled his arc, the 75 000 hectare reserve - South Africa's 5th largest - was stocked with 10 000 head of game, comprising 27 different species. The park's very existence contributes to the preservation of local fauna and flora and rare animals such as rhino and wild dog, and also provides a more sustainable environment for the local people.

Madikwe's location means that it lies in the transition zone with the Kalahari basin, the largest semi-desert in the world. Species that occur naturally in the Kalahari can be spotted at Madikwe, giving it a unique appeal in South Africa.

A game reintroduction programme, Operation Phoenix, is the largest game translocation exercise in the world. More than 8,000 animals of 28 species have so far been released into the reserve.

This is a superb self-drive or fly-in destination in South Africa for families with children. Only 4 hours by road from Jo'burg and Pretoria, while it is situated on 75 000 ha next to Pilanesberg and near the Kruger Park.

The winter months of May to September are best for wildlife viewing. During this dry time, vegetation thins and animals gathers around water sources, making them easier to spot.

The Dwarsberg Mountain Range forms the southern boundary of the reserve, while an undulating vegetated plateau extends north until reaching an escarpment. This otherwise flat land is interrupted by the Tshwene Hills and peaking inselbergs.

The Madikwe Game Reserve, being malaria-free, is ideal for guests with young children.  Thakadu River Camp is one of the more affordable options. The lodge has superb walking and open vehicle safari destination, where guests are accompanied by well trained and informative rangers

Morukuru Safari Lodge is an intimate bush villa suited to guests travelling with small groups of friends and families, looking for an exclusive-use bush experience that combines luxury and warm African hospitality. At Morukuru Lodge, guests will have their own private game viewing vehicle and game ranger which will offer the flexibility of scheduling game drives

Jamala Madikwe offers premier accommodation in 5 individual villas with a spectacular views of the surrounding reserve. The lodge is designed with African elegance and opulent warmth.

Due to Madikwe's location on the border of South Africa and Botswana, it can be accessed from within both countries. It is only 28km from Gaborone, Botswana's capital, and 360km from Johannesburg.

Sun Safaris will book their guests on a direct flight from OR Tambo International Airport in Johannesburg to Madikwe Game Reserve - a flight that is scheduled twice a day, in the morning and the afternoon. The flight only takes an hour and will deliver guests at the reserve airport, from where they will be picked up by their hosts from the lodge and driven then final leg to their booked accommodation.

Alternatively, guests exploring South Africa via road can easily reach Madikwe in a rental car. It is set in the region a beautiful collection of reserves and wildlife areas, including the Kruger Park, and the drive will be pleasant. If guests are driving directly from OR Tambo Airport, it will take them roughly 4 hours, depending on how often they stop to admire the scenery!

Not only does this reserve boast the Big 5, but it also has the Super 7. This adds cheetah and wild dog to the traditional five animals; leopard, lion, buffalo, elephant and rhino. These 2 added species are serious carnivores and they are both specialised in incredible ways. Both the cheetah and the wild dog are endangered species, putting these sightings high up on traveller's game spotting lists.

Sable, eland, gemsbok, giraffe, hippo, zebra, wildebeest and large herds of plains game add to the plethora of animals residing in this reserve. Species specialised for a semi-arid environment, such as the brown hyena, African wild cat, honey badger and bat-eared fox occur here naturally, due to Madikwe's morphing environment with the Kalahari to the north. The game viewing appeal is enhanced by the astounding 350 species of bird that have been recorded in the area. 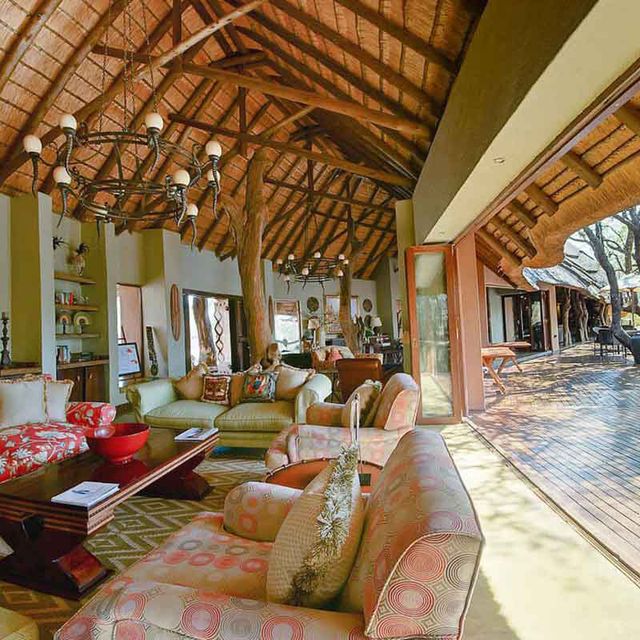 Madikwe Safari Lodge is located in one of South Africa’s largest sanctuaries and the reserve is malaria free. The area offers an abundance of wildlife as well as superb bird watching with over 350 bird species in the reserve. 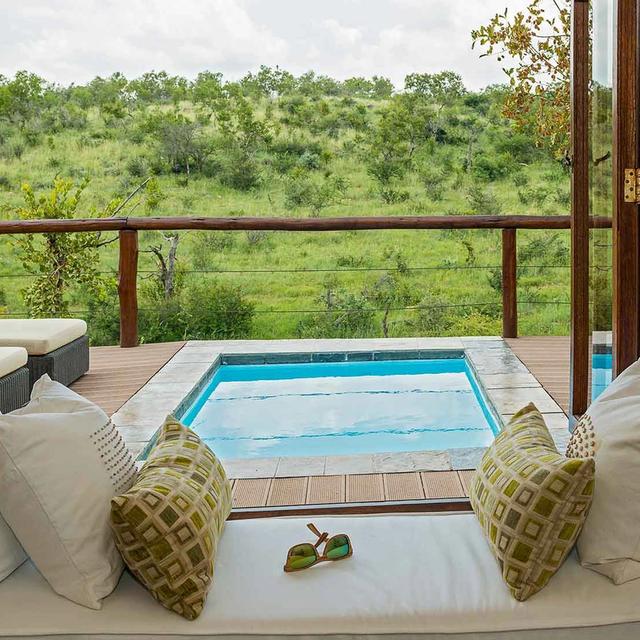 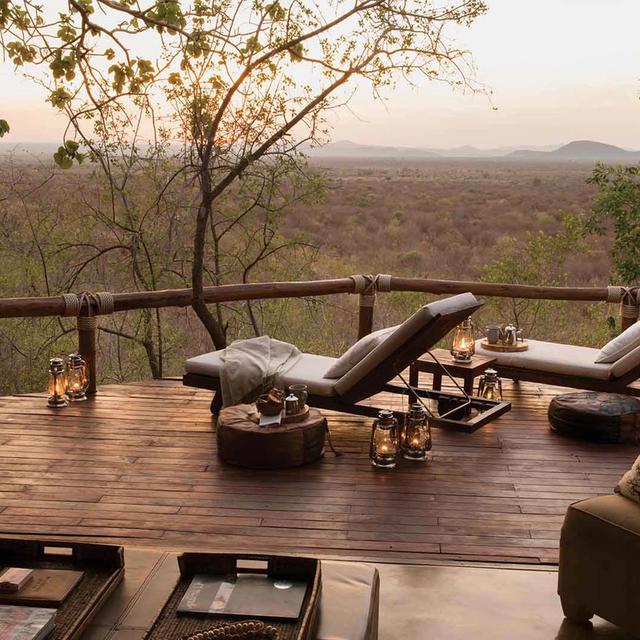 Thakadu River Camp is a luxurious tented safari camp overlooking the Marico River in the Madikwe Game Reserve offering beautiful views. The camp is family-friendly, accommodation is luxurious and the safari tents have private viewing decks. 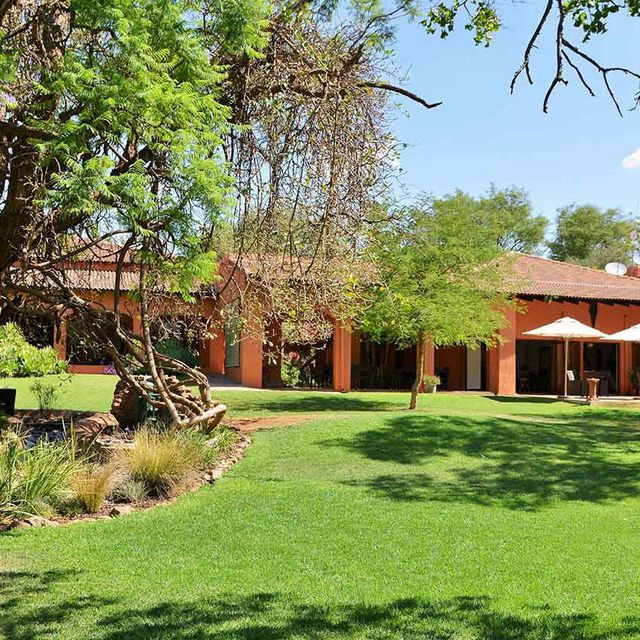 Panoramic views, exotic sounds and wild aromas of the bush are the essence of the Jamala Madikwe experience in the malaria-free Madikwe Game Reserve. Premier accommodation in 5 individual villas with a spectacular game, including African wild dog. 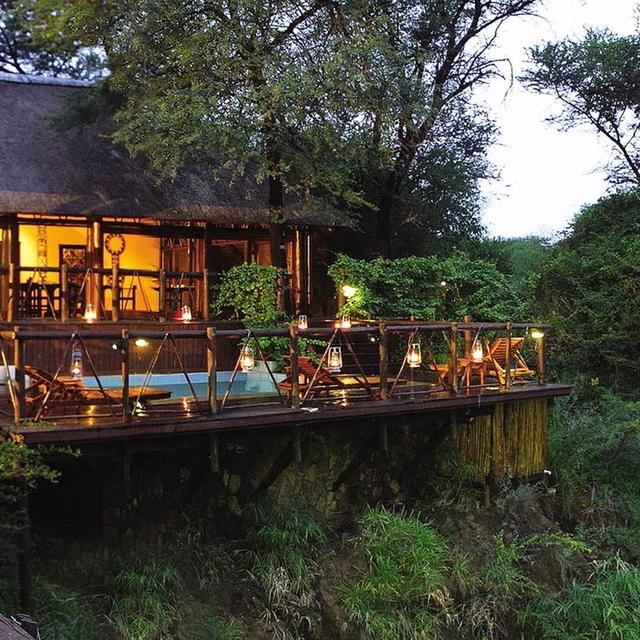 Jaci’s Safari Lodge is situated in the malaria-free Madikwe Game Reserve. The lodge offers a unique and intimate safari experience and is privately owned and managed. Guests can expect to see wild dog, rhino, plains game, and over 340 species of bird.